Our new little female Jamthund is in that litter. She was born March 13th, 2016, I will be going overseas to get her in 10 weeks time. She is from ancient hunting lineages, and her ancestors are all true Jamthund hunters. 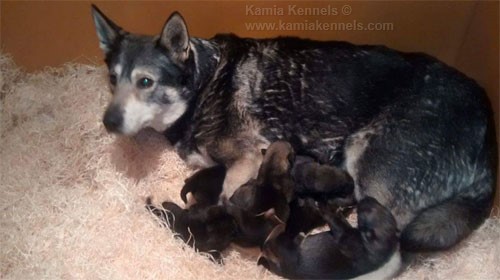 Jamthund Males like Rico are magnificent Elkhounds. Ancient lineage dogs that have been a part of the Scandinavian regions for centuries. 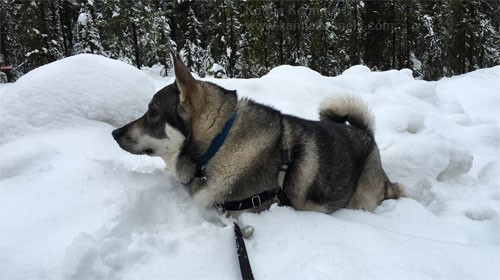 The ancient Jamthund can hunt all day and relax by the fire in the evening. They are a very social dog, they want to be around you. 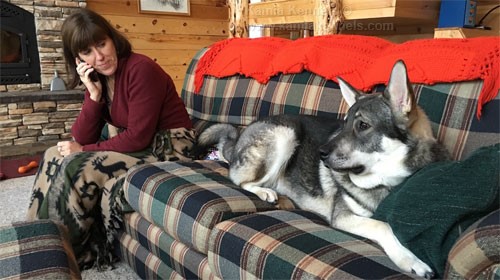 Rico and Kalia will be having a litter this summer. We are very excited about this young pair, they are exceptional Elkhounds. 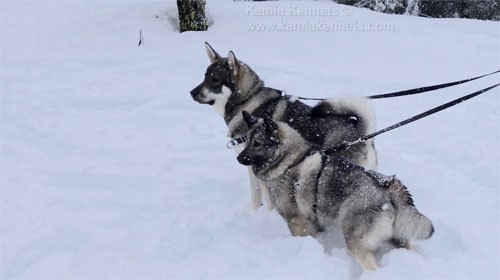 Beth and Russ are shown here with Rico and Kalia. We were out for a great hike with these young Swedish Elkhounds up above the kennel area. 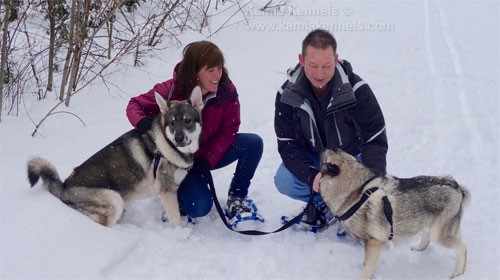 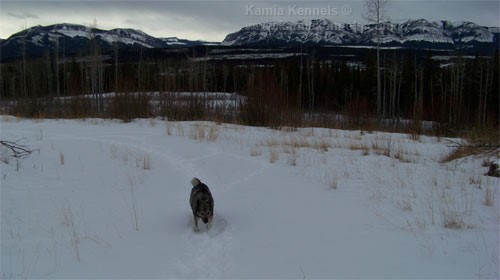 Takoda and I have hiked the rugged regions of Western Canada for years, he is my most faithful companion. 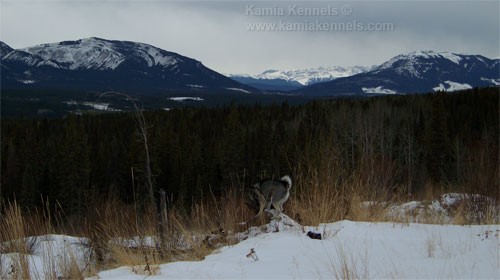 Jamthund Male Rico and I

I sit here on a winter hike with the the young Jamthund Rico. I am truly excited about the future of the Jamthund in Canada. 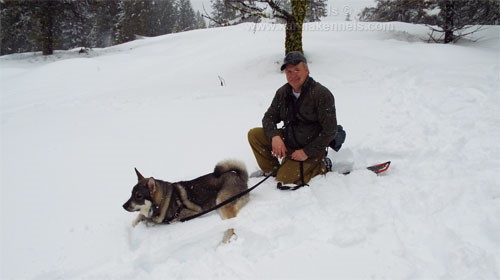 A dog as old as the history of the free world, Jamthund’s ancestry date back to prehistoric times when northern Sweden was colonized from the west (Norwegian coast) and from the east (Finland).

The breed is named after Jamtland, a district in the middle of Sweden, situated close to the Swedish-Norwegian border. The district spans over 50,000 square kilometers and experiences some of the harshest Nordic weather in the world.

A member of the Spitz family, these hardy and insurmountable dogs are only found in the harshest of Arctic climates around the world, like Scandinavia, Russia, and Canada.

In the timeframe around 1942, a man named Aksel Lindstrom discovered his favorite Nordic dog breed, the Swedish Elkhound, which later became the Jamthund, was almost extinct as only a few of his countrymen were making an effort to distinguish the different Elkhound breeds. 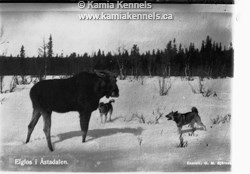 A dog as old as the history of the free world, Jamthund’s ancestry date back to prehistoric times when northern Sweden was colonized from the west (Norwegian coast) and from the east (Finland). For thousands of years, they were grouped in the same categories as Norwegian Elkhounds and Grahunds. It wasn’t until 1946 the Jamthund was officially recognized as its own, majestic dog breed.

The breed is named after Jamtland, a district in the middle of Sweden, situated close to the Swedish-Norwegian border. The district spans over 50,000 square kilometers and experiences some of the harshest Nordic weather in the world. Additionally, it’s a mountainous area with up to 1,762 meters of mountains and widespread wood coverage. Barely inhabited by Swedish natives throughout its history, the territory’s climate is a testimony to how infallible, strong, and powerful Jamthunds are. 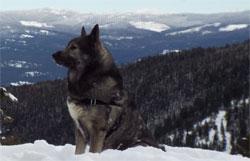 As an independent republic during the Viking Age, this notorious territory became the battlefield between Swedish and Danish/Norwegian kingdoms in the 16th and 17th centuries. Eventually won out by the Swedish, the ominous and icy terrain makes for a breathtakingly beautiful, and wildlife friendly area. From it, the Jamthund was born. A member of the Spitz family, these hardy and insurmountable dogs are only found in the harshest of Arctic climates around the world, like Scandinavia, Russia, and Canada. Because of their natural climate, Jamthund’s build and coat are a product of their environment. Their warm and thick coats are waterproof, designed to send heavy snowfalls effortlessly rolling off their backs. Jamthund heads are wedged shaped to withstand harsh and high-speed winds, and their flexible and enduring gait permits them to run over rugged terrain for miles on end. The perfect, hardy wilderness dog, Jamthunds are built to conquer the impassable wildernesses of the Nordic world. 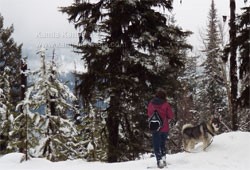 It is important to note there are little differences between the Jamthund and the Norwegian Elkhounds. Both undoubtedly share the same ancestry in their early history. It is hard for historians to pinpoint the exact time when the two breeds deviated from one another. With very minor differences notable today, it’s incredibly hard to tell the two breeds apart. This closeness lead to the confusion on the part of many who when the Norwegian Elkhound Association started pre-1900 thought that all grey Elkhounds were essentially the same, or one breed. It was common for the next 40 years or more that many referred to both as the same, the Norwegian Elkhound.

Only those few breeders who put more stock in hunting abilities and lived remotely were keeping the lineages separate and knew the differences in the two. The differences are there in the big Swedish Grey’s, they are distinct and had been selectively bred for centuries, but this was fading in the early 1900’s. The magnificent big Swedish Elkhounds were becoming very hard to find. Many breeders were finding it difficult to keep the lineage pure as the proliferation of the smaller grey, or Norwegian Elkhound was finding it’s way into the breeding of the larger greys. Only those old breeders, living in the harsh regions of the Jamtland province and a few other areas still had the true big Swedish Elkhounds. 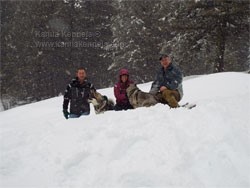 In the timeframe around 1942, a man named Aksel Lindstrom discovered his favorite Nordic dog breed, the Swedish Elkhound, which later became the Jamthund, was almost extinct as only a few of his countrymen were making an effort to distinguish the different Elkhound breeds. The Norwegian Elkhound, or Grahund had been given all the attention, and for many, the assumption was all the grey Elkhound were one. Aksel Lindstrom disagreed, and knew differently. As a young boy he had witnessed many of the grand big dogs in his homeland region. He wrote an article on the Jamthund, and received national attention, most notably from Count Bjorn von Rosen, a celebrated dog fancier and diplomat. Together they contacted the Swedish Spitz Dog Club and presented their case for the Jamthund. The Club agreed the dog breed must be saved, and that same year, the Swedish Kennel Club officially recognized the Jamthund. It took a couple years after to sort out official height and coat requirements for classifying a dog as either Jamthund or Grahund, but the dog enthusiasts were able to agree on final standards by 1946. 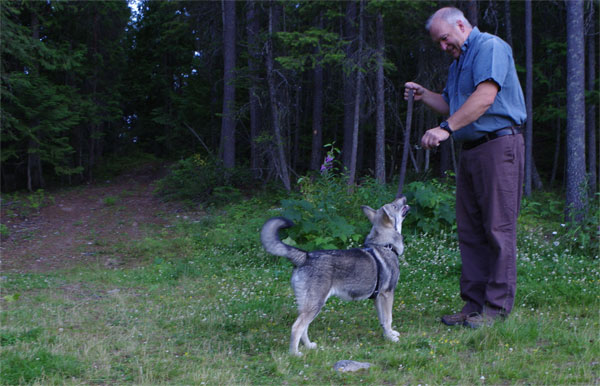 Aina - Jamthund Female 4 Months Old with Kamia Kennels Founder Merv Carlson Click The Image To Read About Aina
To find pure Jamthund’s outside of Sweden is incredibly rare. A celebrated and ceremonial dog of Sweden, they are popular and common throughout the icy Nordic country and are well established in Finland and the close Scandinavian countries. But, what about outside of Sweden and Finland?

Some of the best and fiercest hunting dogs in the world, Kamia Kennels Jamthund litter will serve as the basis and purest dog selection for Arctic hunting on the whole continent. Fast, stealthy, and unwaveringly loyal to owners, Jamthunds are noted for their abilities to find large wildlife, like moose, and circle them until their beloved hunters arrive for the final kill.

Kamia Kennels first celebrated Swedish Elkhound male Takoda is an example of the very embodiment of the power and natural agility evident in these century-old dogs. A sight that can only beheld in person, these dogs run with the spirit and essence of the North throughout their veins. With the announcement of the planned litter with the pure Jamthund male, Rico, an important dog breed luckily is still going strong today, Kamia Kennels is committed to the longevity of the breed for years to come. 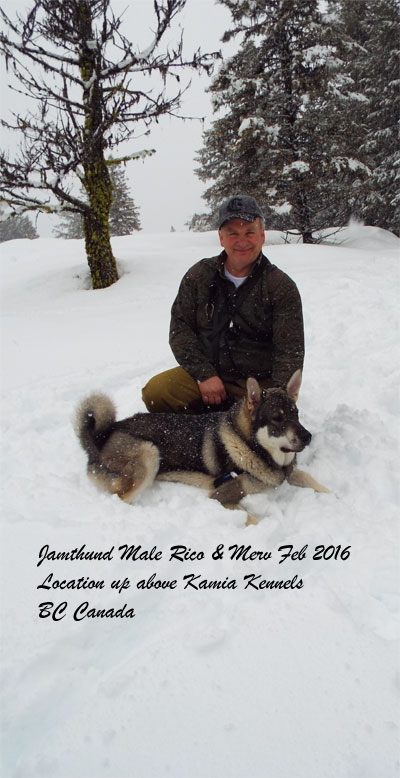 I am extremely happy to announce the new litter between the big Jamthund Rico and our Swedish Elkhound Aina, our new Jamthund. It's been a pleasure of mine to be able to share the ancient big Swedish dogs with our North American comrades. As most of you know I have had the supreme privledge to own and have as my companion one of the greatest Swedish Elkhounds in North America, my big fella Takoda. He has traveled the remote regions of western Canada with me now for coming onto 10 years. Truly an outstanding companion.

We are in the southern end of the province of BC, right up next to the old ghost town of Phoenix, once Canada's highest city! I am shown below with Rico and Aina on a hike up near it January 2018. We had a great time. 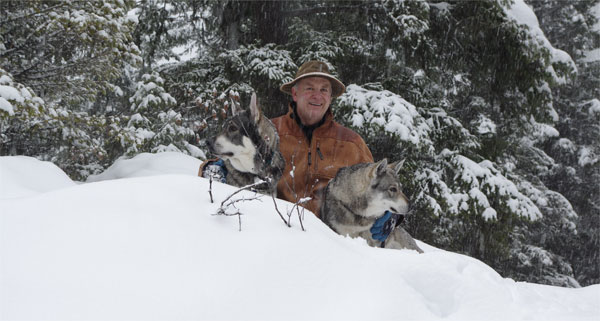